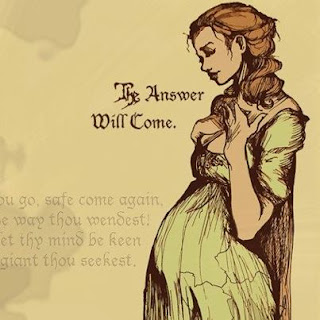 In Norse mythology, Freyja (Old Norse the "Lady") is a goddess associated with love, beauty, fertility, gold, senior, war, and death. Freyja is the owner of the necklace Brísingamen, rides a chariot pulled by two cats, owns the boar Hildisvíni, possesses a cloak of falcon feathers, and, by her husband Óðr, is the mother of two daughters, Hnoss and Gersemi. Modern forms of the name include Freya, Frejya, Freyia, Frøya, Frøjya, and Freia.

Freya was the sister of the god Freyr, and was one of the Vanir, the Norse deities of earth and water that lived in Asgard. Venerated by women, heroes and rulers alike, she was the Scandinavian goddess of fertility and abundance. Freyja could be called upon for assistance in childbirth and conception, to aid with marital problems, or to bestow fruitfulness upon the land and sea.

Freya rules over her heavenly afterlife field Fólkvangr and there receives half of those that die in battle, whereas the other half go to the god Odin's hall, Valhalla. Freyja assists other deities by allowing them to use her feathered cloak, is invoked in matters of fertility and love, and is frequently sought after by powerful jötnar who wish to make her their wife. Freyja's husband, the god Óðr, is frequently absent. She cries tears of red gold for him, and searches for him under assumed names.  From Freya comes the name for Friday .

Making Friday a day to pick your battles, do spell work to assist righting a wrong, fertility, love spells, family matters concerning conflicts and working with plants. It is also a wonderful time to let go of unwanted things (death of an idea, old habit, ect).

With the New Year energy still fresh, still powerful, still seeking direction. You can take control of it.... or it can lead you on a unsteady way as it usually does. Be dynamic, be focused, pick your new path. Write it down, consider your plans, review them regularly and then do it - take a few steps into your new life. Go on then... off you go.

Aspergers
These are used for sprinkling consecrated water to purify an area of negative vibrations and energies.

Herbal Asperger
For this you will need fresh herbs. These should be available in the produce section of your
supermarket if you don't have them in your garden. You will need one or two sprigs about six inches long each of the following herbs: Rosemary, Sage, Mint. Bind their stems together at the top with white thread to make a bundle. Dip into the consecrated water and sprinkle it throughout
the area to be purified. Wonderful for spells, candles and clearing locations.


Crafts to play around with. 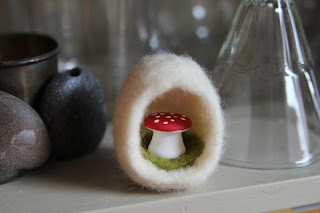 TOADSTOOL IN AN EGG
Tutorial
http://www.54stitches.com/2011/11/tis-the-season-for-swapping.html
Perfect for Imbolc / Ostara/ Easter and Spring 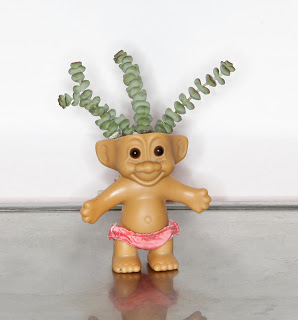 also a reuse an old toy craft. When your Trolls loose their hair as they sometimes do they can become a small planter for small Cactus. here is another one 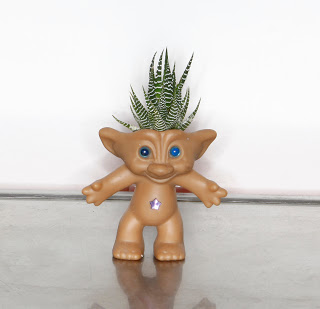 I found these on http://recycledawblog.blogspot.com/2013/01/how-to-make-troll-doll-succulent-garden.html but they are easy to make simply put dirt where the hair was and put in a plant that grows very slowly. Then they can be dressed or not and put on shelves or windowsills. A perfect child's room plant provided they know not to eat them or play with the dolls.